From nautical-themed playgrounds to those engaging kids physically and mentally, these playgrounds are worth the schlep and will provide nonstop fun for the whole family.

There are tons of playgrounds to choose from in NYC, and if you’re like most New Yorkers, you have your favorite one. You know the best time to go, the other parents and kids, and even have your go-to coffee shop and family lunch spot in the area. But like anything else, that can get a little old. So, how about breaking from the norm this year and exploring a new playground? To that end, we’ve rounded up some great playgrounds in NYC for the family to explore and hopefully visit again and again. Don’t forget to pack plenty of sunscreen, swim gear, and a change of clothes!

Manhattan, East Side of Central Park at 85th Street

Why we love it: Here, kids will have fun while learning about Ancient Egypt. Inspired by the Egyptian Art hanging in the Metropolitan Museum of Art, the play area features pyramid-shaped climbers with slides and tunnels for imaginative play that’s ideal for younger kids. For older climbers, there are wooden climbers that offer a more challenging experience. Keeping with the Ancient Egyptian theme, there’s an obelisk-shaped structure that towers over the little ones in the sandbox area. After running around, kids can fly in the air on one of the bucket or tire swings. To cool off, tiny tots can get sprinkled with water from spray nozzles in the wall.

Why we love it: More than just a playground, this 1.8-acre open meadow has a variety of play features that is sure to delight kids of all ages. For hours on end, children can play in the multi-use space that has an artificial turf and safety surfacing, soar in the air on the swings, and explore the giant maze-like climbers. Touted as the oldest playground in Central Park (it was created in 1927), Heckscher has a climber where older kids can get their feet wet as they walk through it, and a water area at the ground-level where water jets into the air to cool them down. Tots can beat the heat in their own semi-private water area with sprinklers. 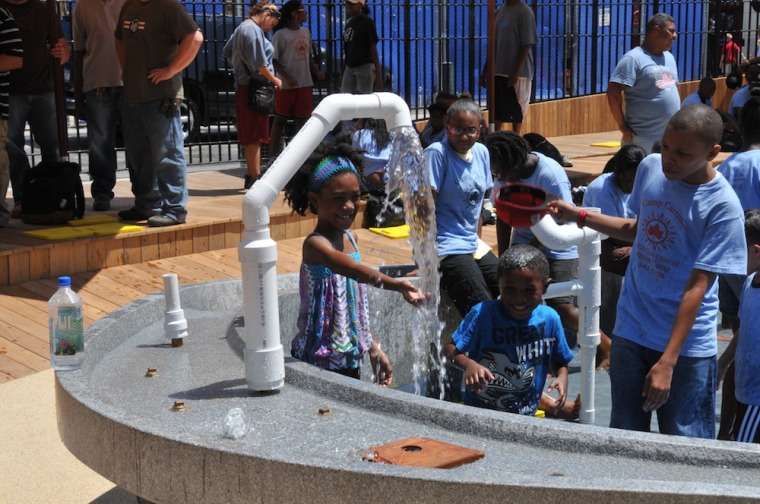 Why we love it: Children get to exercise their mental muscles as well as get some physical exercise. The famous David Rockwell-designed space encourages kids to use their imagination to create their own play area using sand, water, giant foam blocks, mats, fabric, wagons, and crates. While building different play spaces, children can run, jump, and climb in the environment they create. And if the sun is beaming, this unique playground has sprinklers and barrels with water hoses that are sure to provide some relief from the heat.

Why we love it: Surrounded by trees and plenty of green space, the main attraction at this cool-looking, design-inspired playground is the giant, silver dome. Once kids figure out how to scale it, it’s a breeze going down. This creative play space also boasts a few spinners kids can take a whirl on, a huge tunnel slide, spiral climbers, swings, and a sandbox where little ones can build mountains. To beat the heat, kids can cool down at the spray shower water feature.

Why we love it: This large children’s playground with artificial turf has something for everyone. There’s a ton of creatively-designed climbing structures to engage the kids, basketball courts for children of all ages (even adults), and a sandbox area with its own jungle gym for younger kids. If the shaded area gets too crowded when the sun is scorching, there’s a water spray feature that the kiddos can cool off at. On top of that, the playground features a small lawn where kids can run around, pretend-play, or just relax.

Why we love it: Opened in 2010, this Brooklyn treasure is worth the trip across the bridge. Boasting more than just a sprawling playground, this daytrip destination will also challenge your kiddos mentally. Here, toddlers and older kids can pile sand as high as they can in one of NYC’s largest sandboxes that’s filled with small, log cabin-like structures, logs, and rocks. Next, head over to Slide Mountain to slide down a curvy 2-story slide and tackle the jungle gyms. If your little ones still need to burn off some energy, kids can soar in the air on one of the playground’s ten swing sets and Tarzan ropes. And nature lovers can take a stroll through the Marsh Gardens. If that weren’t enough, kids can beat the summer heat at the Water Lab. The most popular part of this dynamic playground has sprinklers jetting water into an enclosed area with climbing structures that will keep kids cool for hours.

Why we love it: This neighborhood jewel reopened in 2010 after a much-needed renovation. Inside a gated area, young kids can enjoy a fun-filled day playing on the jungle gym, going down the slide, and engaging in imaginative play with the steering wheels. There are all kinds of noise-making objects, seats that they can balance on or just sit, and a separate swing area that kids can enjoy. When your kiddos need a little break, there are seats made just for them to relax on. Not to be left out, for older siblings there’s a giant rope-climbing structure, a couple of spinners for them to take a whirl on, and a jungle gym with ropes, tunnels, slides, chain ladders, and monkey bars on the opposite end of the playground.

Why we love it: Situated on 12 acres along Queen’s waterfront with picturesque views of the Manhattan Skyline, Gantry Park’s beautiful playground is an oasis of fun. With a creative design that rivals any work of modern art, this playground features whimsical, top-notch play equipment in fun, playful colors that will awaken a sense of wonder and play in your kids. This destination play area features jungle gyms, spinners, a life-size spider web climber, futuristic-looking slides, play equipment with built-in seating, monkey bars, and a number of climbing structures that will challenge kids of all ages. Not to be outdone, the rubber flooring is just as whimsical as the posh play equipment with its bold colors and artistic design. After hours of unfettered play, the family can catch some shade under one of the park’s willow trees or beat the heat at the water play area (open when a lifeguard is on duty).

Playground for All Children at Flushing Meadows Corona Park

Why we love it: Living up to its name, this was the first playground (built in 1984) in the U.S. for children with and without disabilities, providing social, sensory, cognitive, and motor stimulation. For kids ages 3-12, this playground boasts a number of jungle gyms with safety surfacing, a traffic bridge with traffic lights, slides, swings, and a 12-foot long suspension bridge. The colorful equipment is accessible by Braille signs and children using crutches and wheelchairs. There’s also an interpretive nature trail in English and Braille where little ones can learn about the environment. Kids can pretend-play in a play area resembling a town created just for them with features such as a schoolhouse, school bus, fire station, and fire truck. What’s more, there’s a racetrack that winds its way around a water feature where kids can cool down, a basketball court, and a meadow where kids can run around or engage in imaginative play. On top of that, the nearby sports arena has basketball, baseball, volleyball, badminton, and the like. 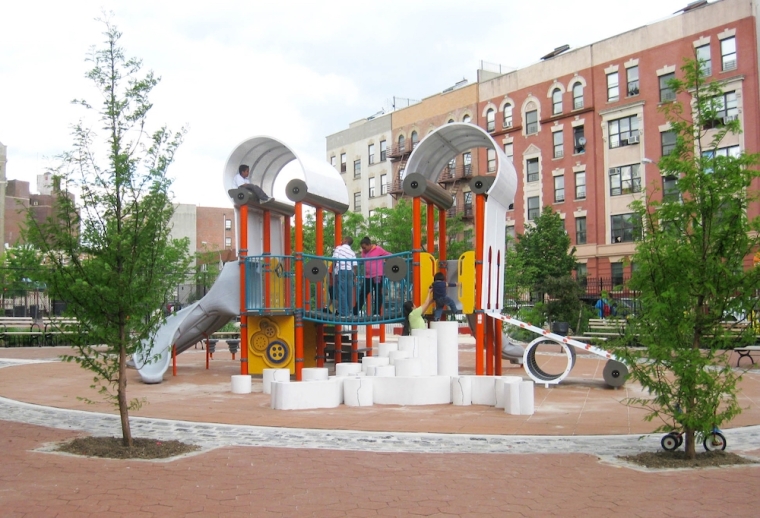 Why we love it: Here children can burn off some energy while taking in some history. After getting a $1 million face-lift several years ago, this play area was transformed into an imaginative playground that is sure to keep the kids engaged for hours. Paying homage to Richard March Hoe, the inventor of the “lightning press” who used to live on this land, the playground features a jungle gym that resembles a life-size rotary printing press with graduated steps that are reminiscent of the printing press’ cylinders and white climbing blocks that symbolize rolls of paper. To boot, there’s a lettered panel with spelling games. If the little ones still have energy, there’s also a sandbox. When the sun is blazing, kids can cool down at the spray shower. The playground is outfitted with sustainable design elements, including runoff water from the spray shower being used for the planting beds, recycled material that was used to build parts of the play area, and trees that were chosen because of their ability to absorb storm water and spray shower runoff.

Why we love it: After undergoing over a $14 million renovation over the years, this former reservoir site, now a well-groomed park can hold its own against many of the other well-known parks around NYC. For the younger set, there’s a climbing rope structure, swings, and a colorful jungle gym with a fun, curvy slide. The older kids have their own challenging jungle gym and climbers to play on. When it gets too hot, there’s a spray plaza with in-ground sprinklers shooting water into the air so kids can cool off. And with basketball and tennis courts, a synthetic playing field surrounded by a track, a state-of-the-art recreation center, and plenty of benches in the shade to rest, no one is going to want to leave this oasis.

Why we love it: Surrounded by 20 acres of undisturbed wilderness, this nautical-themed, one-of-a-kind playground is a pirate’s dream and will have the family hitting the high seas for adventure. The nautical play equipment—inspired by the area’s seafaring history—includes a lighthouse, a climbing shark, Staten Island Ferry-inspired play structures, and swings. The main attraction is a huge shipwreck play structure that has a dragon shiphead, a slide, and climbing ladders that kids can explore and pretend-play. If that weren’t enough, there’s also a jungle gym, a water play area with in-ground sprinklers that creates a gentle spray shower for the kids to enjoy, and sand play areas with drums, a treasure chest, and animal-inspired play structures.